The Origin of the Suction Pump


The piston pump of Ctesibius (an engineer from Alexandria, Egypt, 3rd century BC) was described by Philo of Byzantium (2nd century BC) because Ctesibius’ book was lost. It was a force pump and was submerged in water; (Fig. 1)[1].

It has the advantage that it will lift water to any height consistent with the pump and the delivery pipe being able to withstand the hydrostatic pressure. But it has significant drawbacks. Firstly, the pumping mechanism is submerged in water; and secondly, if the water-level falls, the cylinder will not fill. The solution to these problems is in the use of a suction pipe on the inlet to the pump. Not only does the suction pipe allow the pump to be set above the water, it will also accommodate changes in the water's level. In theory the suction stage can be about 10 meters (33 feet), the height to which atmospheric pressure will support a column of water, but in practice more than 7.62 meters (25 feet) is almost impossible to realize.

The European piston pump that made its first appearance in the fifteenth-century in the writings of Taccola (c. 1450) and Martini (c. 1475) had a suction pipe incorporated into it[2]. Fig 2. shows an underdeveloped design with a crude construction. 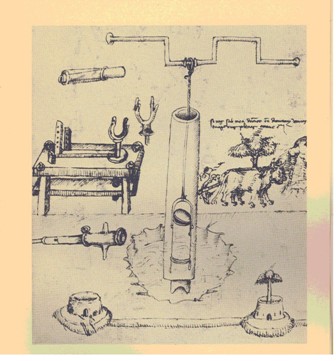 The cylinder and piston are made from wood that does not sustain pressure, and there is no delivery pipe. Water discharges at the outlet of the pump. Instead of a connecting rod the illustration shows a rope[3].

There is no proof, however, of a European tradition in piston pumps in the Middle Ages that could have resulted in the development of the suction pump.

The assumption that Taccola (c. 1450) was the first to describe a suction pump[4] is not substantiated. The only explanation for the sudden appearance of the suction pump in the writings of the Renaissance engineers in Europe is that the idea was inherited from Islam whose engineers were familiar with piston pumps for a long time throughout the Middle Ages[5].

Al-Jazari wrote his book on machines in 1206. Among his water raising machines he described a two cylinder suction piston pump which can be said that it had a direct significance in the development of modern engineering. This pump is driven by a water-wheel, which drives, through a system of gears, an oscillating slot-rod to which the rods of two pistons are attached. The pistons work in horizontally opposed cylinders, each provided with valve-operated suction and delivery pipes. The delivery pipes are joined above the centre of the machine to form a single outlet into the irrigation system. (Fig. 3)[6] and Fig.4)[7]

This pump is remarkable for three reasons: a) the earliest known use of true suction pipe in a pump, b) the application of the double-acting principle, and c) the conversion of rotary to reciprocating motion. It therefore has an important place in the development of the steam engine and .of modern reciprocating pumps[8].